Mimosas and Mallets, What a Day!

Recognize the man above?  Well you should.  He’s Ignacio “Nacho” Figueras, the Captain of the Black Watch polo team, face of the Ralph Lauren Polo clothing and fragrance lines, and likely the second most interesting man in the world.  Oh, and by the way ladies, he’s married and has three kids.  So where does one go to find Nacho and his beautiful made pony?  Well to the Veuve Clicquot Polo Classic on Governors Island, of course.  Which is what we (the NYC crew) chose to do as another thing to mark off the “Living in New York City” bucket list.  Like all good sporting events though, there must be some element of pre-gaming/tailgating involved.  Tailgating in NYC is a bit prohibitive since nobody owns a car and the taxis get expensive after about 15 minutes of them sitting in park with the meter running and you on the ‘tailgate’ fixing up burgers.  As a result we prefer pre-gaming and when your goal is to leave for the ferry before Noon, pre-gaming means what else besides brunch?

Miss Fancy Boots and I decided to host the gang for a mimosa brunch at our place before hand.  Primped, prepped, and ready to go when the guests started arriving at 10:00am we had quite the spread by the end of the morning.  We supplied the OJ and Champagne, albeit not Veuve Clicquot as remember I work for a nonprofit, but one of our guests was kind enough to bring a symbolic bottle for a toast.  The guests provided all the food as their ticket of entry, sans the [apparently popular] ham biscuits I insisted on making.  Check out all the yummy breakfast foods we had!

And, while breakfast was certainly flavorful and filling whilst watching the French Open final between Nadal and Federer, the real headline of the day was the outfits.  A polo match in the States is the equivalent of the Royal Wedding and the Kentucky Derby having a child.  The hats and fascinators are sure to make an appearance along with stunning dresses and shoes.  It was clear that a lot of the women in attendance Sunday were drooling at their first opportunity since the Royal Wedding to show off their competing American outfits.  Our ladies were certainly among the best dressed and the guys cleaned up pretty nicely also. 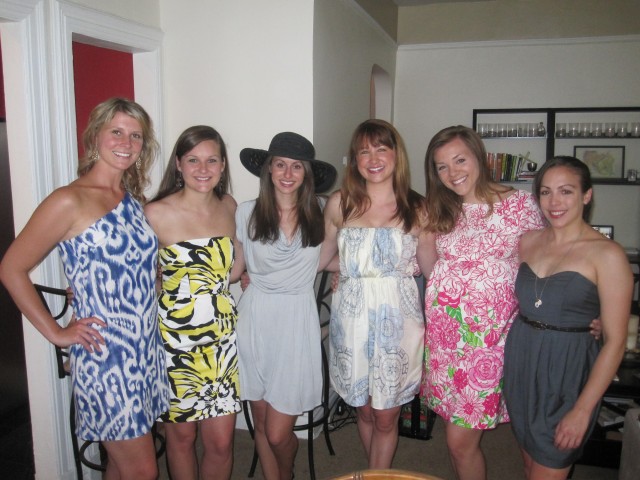 Trying to Match the Ladies

In typical New York City fashion, the subways were all messed up because of construction on the weekends.  After a longer than normal trip down to the ferry we found a ridiculously long line waiting for us.  Note to self: next time arrive about two hours earlier.  The line moved surprisingly quickly though and we even had a celebrity sighting, the one and only Bill Cunningham (famous New York Times photographer).

We're aiming for that ferry terminal on the left... a ways to go.

Once we got to Governors Island it was a beautiful, albeit a bit chilly, day for a polo match.  The people watching was in full effect and quite some quality entertainment.  The food and champagne was absurdly overpriced, luckily we brought a picnic bag.  The trip back was a bit disastrous thanks to the incompetence of the security firm that was hired to herd the crowd into the ferry line, but we survived and celebrated with dinner at Mad Dog & Beans on Stone St.  All in all I would definitely go to another polo match, just maybe not this one, which was borderline chaotic, but still a wonderful time with friends!

Some highlights from the day…

Why hello there young lady. 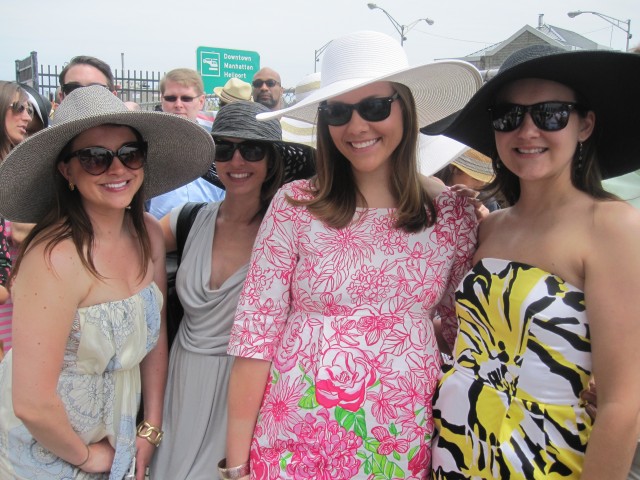 A fun day as you can see.  If you have the chance, I definitely recommend attending a polo match!

Until next time, Cheers!

Born and raised in the Hampton Roads region of Virginia, Jeremy grew up with the sand between his toes and the sun shining on his skin all year long. A "student of the game" in both baseball and golf, he wishes he had more time to enjoy them up in the Big Apple. A somewhat recent graduate of Virginia Polytechnic Institute and State University, more fondly called Virginia Tech, his studies yielded two bachelor's degrees. The first a B.S. in Human Resource Management and the second a B.A. in Public and Non-Profit Management. While he misses Blacksburg, the Home of the Hokies, he's embraced a new life in New York, where as Mr. Sinatra says, "... if you can make it here, you can make it anywhere." He currently works for New York City's premier volunteer organization, planning customized corporate service projects.
View all posts by Jeremy →
This entry was posted in Sports, The Pursuit of Happiness and tagged Bill Cunningham, brunch, champagne, fashion, ferry, Governors Island, hats, Kentucky Derby, mimosa, Nacho Figueras, polo, pony, Royal Wedding, Veuve Cliquot. Bookmark the permalink.